Nazi Nexus is the long-awaited wrap-up in a single explosive volume that details the pivotal corporate American connection to the Holocaust. The biggest names and crimes are all there. IBM and its facilitation of the identification and accelerated destruction of the Jews; General Motors and its rapid motorization of the German military enabling the conquest of Europe and the capture of Jews everywhere; Ford Motor Company for its political inspiration; the Rockefeller Foundation for its financing of deadly eugenic science and the program that sent Mengele into Auschwitz; the Carnegie Institution for its proliferation of the concept of race science, racial laws, and the very mathematical formula used to brand the Jews for systematic destruction; and others. 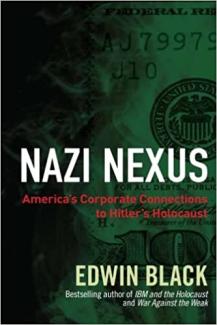