[Audiobook] IBM and the Holocaust

The Strategic Alliance Between Nazi Germany and America's Most Powerful Corporation

IBM and the Holocaust audiobook

IBM and the Holocaust: The Strategic Alliance Between Nazi Germany and America's Most Powerful Corporation is the award-winning, New York Times bestselling shocker with a million copies in print. It details IBM's conscious co-planning and co-organizing of the Holocaust with the Nazis, all micromanaged by its president Thomas J Watson from New York and Paris. The expanded edition includes 37 pages of previously unpublished documents, pictures, internal company correspondence, and other archival materials to produce an even more explosive volume.

Originally published to extraordinary praise in 2001, this provocative, award-winning international bestseller has stood the test of time. It chronicles the story of IBM's strategic alliance with Nazi Germany. IBM and the Holocaust provides nothing less than a chilling investigation into corporate complicity. Edwin Black's monumental research exposes how IBM and its subsidiaries helped create enabling technologies for the Nazis, step-by-step, from the identification and cataloging programs of the 1930s to the selections of the 1940s. 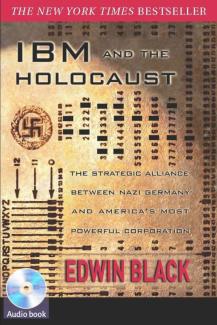